Firstly, apologies that not much has happened recently.  I’ve been under the weather for the last few days, so only made minimal progress.  However, feeling a bit better, so Tonight I will try streaming Zork!

I am planning to go live at 7PM UK time tonight for around an hour (If you’re not in the UK, see this countdown timer).  If you missed it, I’m sorry – but I hope to have a transcript up soon, and will probably do it again shortly.

Essentially, there will be two aspects to the streaming.

So, that’s the important stuff that you need to know to follow along tonight.

In other news, as I was happy enough with how the prototype PCB seems to be working, I’ve laid out a real board now.  The PCBs are currently being manufactured in China, although it isn’t looking likely that I’ll get them back before the end of this particular Retro Challenge.  But if I do, then expect an update here!  Here’s a sneaky peek at what they should look like though; 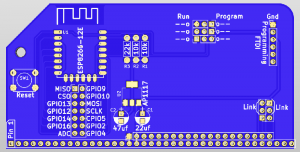